To use this booklet, review the glossary, study the examples, then
work through the exercises. The answers are at the end of the
booklet. When you find an unfamiliar word, check the glossary for
a definition or explanation.

Calculators are not allowed when taking the Computerized
Placement Test (CPT), nor in Fundamentals of Mathematics, Pre-
Algebra, and Elementary Algebra; therefore, do not rely on a
calculator when working the problems in this booklet.

If you have difficulty understanding any of the concepts, come to
one of the Tutoring Centers located on the Lynn, Danvers Main
and Danvers Hathorne Campuses. Hours are available at (978)
762-4000 x 5410.  The Centers are closed when school is not in
session, and Summer hours are limited.

Boosting: Rewriting a fraction as an equivalent fraction with a higher denominator.

Denominator: Bottom number of a fraction indicating how many parts make a whole.

Difference: The result when two numbers are subtracted.

Divisor: The number after the division sign in a division problem, (i.e. 12÷7); or the bottom
number of a fraction, (i.e.

); the number "outside" the division house (i.e.

Equivalent Fraction: Fractions that are found by multiplying the numerators and
denominators by the same number.

Fraction: Any number written in the form of one whole number over another,

Fraction Bar: The line separating the numerator and denominator in a fraction, and it indicates
division.

Greatest Common Factor (GCF): The largest matching factor of two or more given numbers.
It is used to reduce fractions.

Improper Fraction: Any fraction with the numerator larger than the denominator.

Mixed Number: A whole number and a fraction. (It implies addition of wholes and parts; that
is,

is read "three and five sevenths".)

Numerator: The top number of a fraction. It indicates how many parts of a certain size are
represented.

Product: The result when two numbers are multiplied.

Proper Fraction: Any fraction when the numerator is less than the denominator.

Quotient: The solution to a division problem.

Remainder:
The number left after a whole number division problem is complete. When
converting an improper fraction to a mixed number, the remainder is the numerator of the
fraction.

Sum: the result when two numbers are added.

The fraction that represents the above picture is

and is read “five sevenths”. That means
that five of the parts are shaded, and it would take seven parts of that size to make a whole.

One whole can be "cut up" into equal size parts; therefore,

A whole number can be written as a fraction with a denominator of 1; for example,

.
Zero can be written as a fraction using zero as the numerator and any whole number as the
denominator, for example,

Any whole number may be written as a mixed number by using a zero fraction. For example, 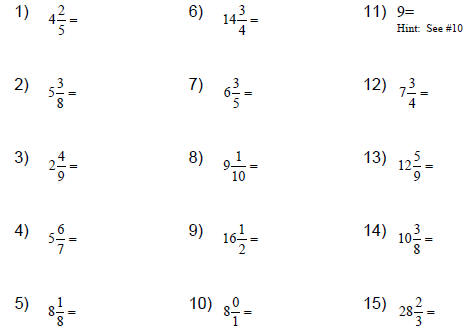 Find the equivalent fractions as indicated: 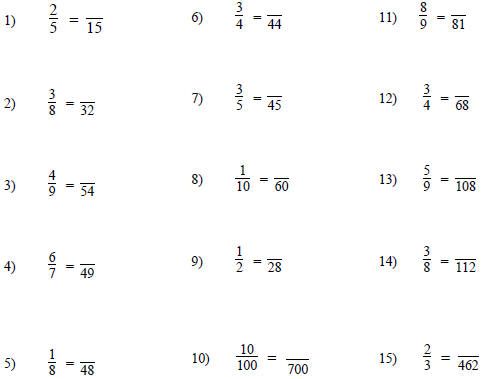 Convert these improper fractions to mixed numbers. Be sure to reduce when it’s
possible.